The graph below illustrates the highs and lows that have been a marked feature of the last decade. Spikes in activity directly correlate to periods of new development, such as the Admiral pre-let which caused a spike in the middle of the recession in 2011, and the BBC pre-let in 2015. In the troughs of the recession lettings hovered at around 300,000 sq ft both at the outset in 2008, and in 2013 just before occupier confidence started to recover. 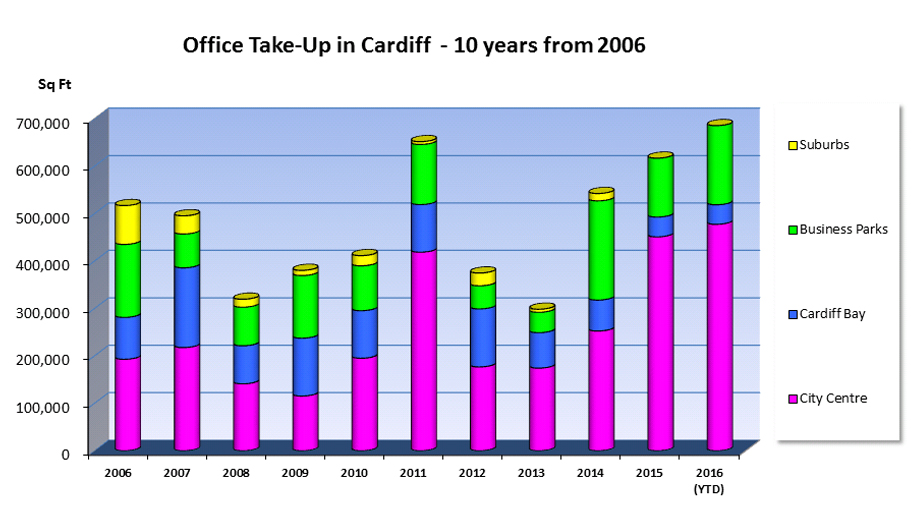 Cardiff city centre is currently dominating the market with 70% of office lettings based there, led by Central Square and Capital Quarter. New stock coming on to the market at these locations accounted for 224,000 sq ft  of Grade A lettings in Cardiff in 2016, out of an overall 261,000 sq ft  in the city centre. Just 22% were located out-of-town and the remainder in Cardiff Bay. Meanwhile, availability of Grade B space is being squeezed as it gets absorbed for alternative uses such as student accommodation. Continued demand is creating upward pressure on rents, with this sector accounting for over 50% of all office transactions throughout the year.

Historically, space of 5,000 sq ft and less has underpinned the sector, but this has been overtaken by lettings exceeding 10,000 sq ft, which accounted for almost double the amount at 372,000 sq ft. However, demand for less than 5,000 sq ft is still strong and in 2016 almost 200,000 sq ft of lettings were for small to medium sized offices. This sector is increasingly being driven by tech and creative industry start-ups and collaborative work space, and is one to watch.

Tim Lawley, Associate Director with Business Space comments, “While city centre lettings have always been higher than other areas, the gap has widened much more in recent years. Last year in particular, there was a dearth of Grade A deals for out-of-town (4,500 sq ft) and Cardiff Bay (7,115 sq ft), suggesting both lack of stock and lack of demand. Stock in the city centre will receive a further boost this year with 54,000 sq ft due to complete at One Canal Parade in summer 2017 and 75,000 sq ft at 3 Capital Quarter by Christmas. It is not an unreasonable prospect that Grade A rents could reach £26 psf this year.”